Home  »  Education in Namibia – How does Namibians enroll?

Below are gathered information on Namibia Education System 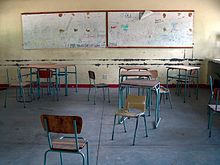 Classroom in Namibia
Education in Namibia is compulsory for 10 years between the ages of 6 and 16. There are approximately 1500 schools in Namibia of which 100 are privately owned.The Constitution directs the government to provide free primary education; however, families must pay fees for uniforms, stationery, books, hostels, and school improvements.

Before independenceBefore Namibia’s independence, the country’s education system was designed to reinforce apartheid rather than provide the necessary human resource base to promote equitable social and economic development. It was fragmented along racial and ethnic lines, with vast disparities in both the allocation of resources and the quality of education offered.

After independenceThe new Government of the Republic of Namibia (GRN) set about to create one unified structure for education administration. Currently, Namibia allocates more than 20% of its national budget to education. This represents six to seven percent of Namibia’s total GDP and is one of the three countries with the highest percentage of GDP directed toward education in the world. Educational institutions in Namibia and their portfolio are accredited by the Namibia Qualifications Authority (NQA). This institution evaluates and accredits national institutions and degrees, as well as foreign qualifications of people who wish to demonstrate the national equivalence of their degrees earned abroad.

Researchers from the United States Agency for International Development opine that the investment is paying off. A new, uniform and learner-centered curriculum for grades one through twelve, finalized in 1998, has received recognition beyond Namibia’s borders and significant progress has been made in the use of English (which replaced Afrikaans as the nation’s official language) as a medium of instruction. About 95 percent of school age children attend school and the number of teachers has increased by almost 30 percent since 1990. Over 3000 new classrooms have been built. As a result of these improvements, repetition rates in all grades have been reduced. Whereas in 1991, half the learners in grade 1 were repeating the grade, by 2003, over 84 percent of learners were earning their promotions on time. Dropout rates have also plummeted.

On the other hand, Namibia’s former Minister of Education Abraham Iyambo summarily described the Namibian education system as “crippled”, citing dropout rates, lack of teaching facilities, financial difficulties, sub-standard vocational training, and absence of pre-primary development. A National Conference on Education, running from 27 June to 1 July 2011, was conferred to address the most pressing issues.

The Namibian education system is experiencing many obstacles. It is faced with serious weaknesses in the provision of education to all. Additionally the quality of education, quality of teachers and the performance of learners is unsatisfactory. The Ministry of Education is drafting an improvement program that is known as the ETSIP (Education and Training Sector Improvement Program). The ETSIP aims to align the entire Namibian education system to Namibia’s Vision 2030 and the needs of the Namibian population.

In all government schools, primary education is free since 2013,  and secondary education since 2016. Tertiary educational institutions, both private and public, charge tuition fees. Corporal punishment is not allowed.

Curriculum development, educational research, and professional development of school teachers is centrally organised by the National Institute for Educational Development (NIED) in Okahandja.

Secondary education stretches over a period of 5 years from Grade 8 to Grade 12. Children are presented with a Junior Secondary School Certificate after successful completion of Grade 10.

Grade 12 cannot be repeated on a full time basis, for learners that wish to pursue further studies they need to obtain a good grade as per the requirements of tertiary institution both locally or abroad. The Evaluation Scale for Grade 12 is:

Universities and collegesNamibia has two public tertiary institutions of general education, the Namibia University of Science and Technology (NUST) and the University of Namibia (UNAM). At NUST admission is based on grade 12 certificate with a maximum of five qualifying subjects with a total score of 25 points or more and a E symbol or better in English.[12] At the University of Namibia’s basic requirement for entrance to undergraduate degree programmes is a Namibia Senior Secondary Certificate (NSSC) with a pass in five subjects with a total score of 25 points, on the UNAM evaluation scale, or more in not more than three examination sittings.

There are a number of specialised tertiary educational institutions such as the College of the Arts (Cota) in Windhoek, The University Centre for Studies in Namibia (TUCSIN) in Windhoek, Oshakati, Rundu, and Rehoboth, the Namibian Maritime and Fisheries Institute (NAMFI) in Walvis Bay, and the Namibian Institute of Mining and Technology (NIMT) in Arandis. 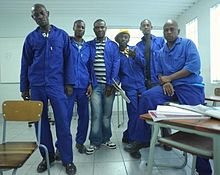 Vocational students in Namibia are given a small amount of money from the government to assist them in attending Vocational Training Centers.

In 1997, the gross primary enrollment rate was 130.6 percent, and the net primary enrollment rate was 91.2 percent. According to the Ministry of Labor’s child labor survey, 80 percent of working children between the ages of 6 and 18 continue to attend school while they are employed. In 1998, there were 400,325 Namibian students in primary school and 115,237 students in secondary schools. The pupil-teacher ratio in 1999 was estimated at 32:1, with about 8% of the GDP being spent on education.

In 2011 the Namibian education system accommodated approximately 600,000 learners of which 174,000 were senior secondary students and below 10,000 were pre-primary pupils.[17] While teachers are seen as generally adequately educated they lack specialised training. Schools consistently perform below expectation; failure and dropout rates are high. Only 12% of learners proceed into tertiary education of any kind due to limited places in universities and vocational training